Taking Care on and off the Sports Field 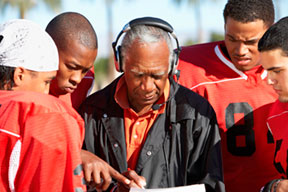 (NewsUSA) – It’s one of the unfortunate truths of our obsession with sports: Coaches don’t normally get much credit unless they take their teams all the way to a title. And yet, there actually still are some coaches — let’s call them the good guys — who view at least a part of their jobs as helping to build character in their players while easing the mental and physical irritations that come with competition.
“Coaches have the power to teach much more than the physical elements of the game,” says acclaimed college football coach David Shaw. “My job is to guide players on how to be successful in the heat of competition, as well as in the classroom and after graduation.”
It makes sense then that Shaw recently teamed up with both the College Football Hall of Fame and Dove Men+Care Deodorant — best known for providing caring products to help end underarm irritation — in a campaign called “Care Always Wins.” Its purpose: Encouraging local fans to nominate candidates for the four school coaches who most “fostered a caring environment on and off the field.”
Which brings us back to the aforementioned “physical irritations.”
One of the things even the winningest coach has in common with fans is the need to pay attention to skin irritations. (Hey, just try imagining how many fewer touchdowns we’d see if quarterbacks all came down with a case of itchy skin.)
Here’s some tips for avoiding such problems:
* Wear moisture-wicking clothes. Chafing — and the rashes that can come from it — is a big risk during extended exercise, says WebMd.com. Workout clothing and sportswear made from these fabrics are specifically designed to keep you “drier and cooler” by pulling moisture away from the skin.
* Commit to a moisturizing skincare routine. “Many men, and in particular athletes, suffer from uncomfortably dry, itchy skin when they don’t have to,” says noted dermatologist Dr. Jeffrey Benabio. His recommendation: Products like Dove Men+Care Body Wash, which he says is clinically proven to fight dry skin with MicroMoisture technology that activates during lathering to guard against discomfort.
* Wash clothes and towels after each use. It may or may not have been covered in science class, but infection-causing germs can hang around to irritate the skin if ignored.
But what about those fan-nominated coaches, you ask?
The “Caring Coach of the Year” awards will be handed out later this year by the Hall of Fame, with the winners receiving funding to support their respective football programs. Learn more at www.dovemencare.com.